Whether you are new to digital design or an experienced professional you have probably heard the terms storyboarding and prototyping at some point.

But what is the difference between the two, and how do you do them?

The main purpose of a storyboard is to understand the content you are developing and help layout the content you are going to develop, whether it be in written format or visual.  Storyboards can include visual, multimedia, text, audio, interactions and navigation details for every slide/scene in your content.

Often storyboards are creating using tools such as Microsoft Word and PowerPoint, but in the modern world of rapid development are there more advanced and collaborative tools available to you?

The answer is yes, there are loads of different ways to do them.

In simple terms prototyping is typically a visual representation of what your content will look like and how a learner/user may interact with the content.  It is sometimes seen as a halfway point between your storyboard and your final developed version of your content.

Whereas a storyboard is a “sketch” of what your content will include, a prototype would typically include elements such as branding, i.e., logos, colours and fonts, graphic mock-ups and even a version of audio that may be used.

Prototyping can help your stakeholders visualise what their final product may look like and allows them to provide feedback before your content goes into final build.

So, which one comes first?

Like the chicken and the egg debate everyone has their own view on this, do you storyboard first, or do you prototype first

Well, I believe it all comes down to the individual project requirements on which one you do first.  Personally, I prefer to prototype first if I have some source content to work with as it helps me visualise how the rest of the storyboard would flow.  It also allows me to share design concepts with my clients to help them visualise what their content may look like.

However, this approach doesn’t always apply, and a rough storyboard is done first.  Typically done when there is a lot of theoretical content that needs to be turned into instruction content and focus on design is not as important in the initial stages.

Now you have decided to storyboard or prototype, what tools can you use?

Traditionally storyboarding has been done using tools such as Microsoft Word and/or PowerPoint, but are these still fit for purpose?

Answer…. yes and no.  Word and PowerPoint are great for putting a written storyboard together but when project timescales are tight, and you need to collaborate with stakeholders there are other ways in which this can be done.  Instead, you could consider using tools such as Google Docs which allow collaborative editing and feedback.

For me personally I haven’t used Word and PowerPoint to storyboard for many years as I am more of a visual designer, but that may not be for everyone.  With tools such as Adobe XD, Sketch, and InVision, to name a few, there are new ways to rapidly prototype and storyboard and still work collaboratively with your extended team and stakeholders.

Why not join the discussion on the 24th March 2021 all about Storyboarding for Digital Design.  Bring along some examples to share with the wider community and even discuss your methods with your peers. 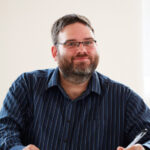 I enjoy all aspects of my job, but my main passion is for digital content creation and being able to drive change within a training & development function. My keen interest in future technologies and techniques allows me to come up with innovative new ways of delivering training. I have worked in a whole range of different industries from construction to telecoms. I have a passion for new technologies and how they can be used to increase business performance through targeted and relevant learning. My experience in multimedia learning including e-learning, video micro learning and gamification has allowed me to develop learning solutions for a wide range of learners.
PrevPreviousRemote working: were you ready?
NextGet to know the eLN Chair: Joan KeevillNext